Deciding to get married to your partner is one of the most exciting moments, and your wedding day will be the most memorable day of your life. However, planning a wedding can be stressful and even overwhelming, primarily because of how much it costs.

So, how do you choose between a courthouse wedding vs. traditional wedding?

In the U.S., couples can expect to spend around $35,000, on average, on their weddings (before they even plan their honeymoon). But big weddings aren’t for everyone. Some couples decide to have a small, less expensive courthouse wedding, even if they receive financial support from their families.

Opting for a courthouse wedding allows you and your fiancé to save money while simultaneously simplifying the wedding planning process. Courthouse weddings can be just as romantic as their large-scale counterparts, and they allow you to spend more money on the reception while still saving overall. 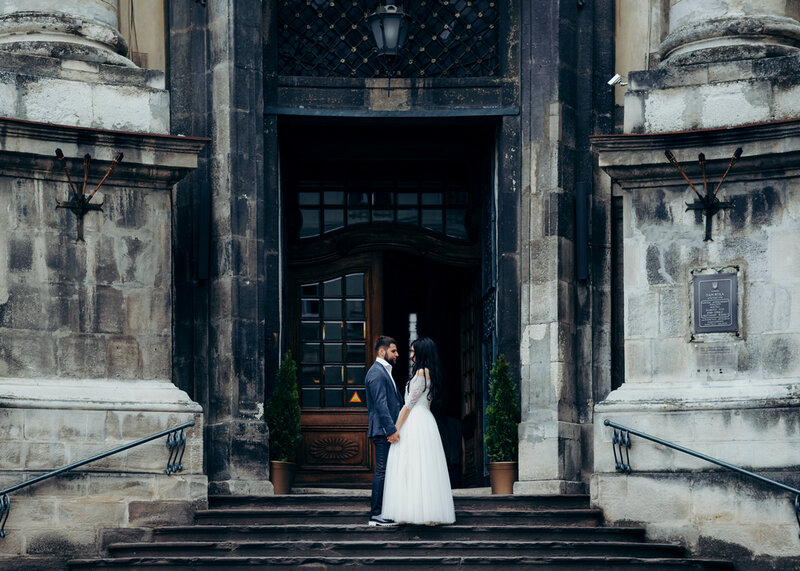 What Is a Courthouse Wedding?

Also known as civil weddings or civil ceremonies, a courthouse wedding is a secular, legally recognized marriage carried out by government officials or state-authorized individuals. Often, couples choose close friends or relatives to officiate their wedding; in many states, becoming an ordained minister is relatively straightforward.

Civil ceremonies tend to be more intimate, even while quick and inexpensive. Couples typically only invite their closest family members and close friends who are part of the wedding, creating a close-knit and small group of people. This heightened sense of privacy and romance is perfect for those who haven’t spent their lives dreaming of a lavish, large wedding.

What to Expect in a Traditional Wedding

Religious weddings take place in a church, chapel, temple, mosque, and other religious venues. These weddings are presided over by a priest or religious official. Often, people choose religious ceremonies even if they aren’t particularly religious, as they enjoy the tradition and atmosphere.

To get married in the Catholic church in the U.S., both parties need to be baptized Christians, and one must be Catholic. The bride and groom sometimes must attend marriage classes, and typically they should be married in a church they belong to or are connected to it somehow.

Traditional marriages require the bride to wear a traditional wedding dress and the groom a nice suit. These ceremonies are formal and include the reading of bible verses, hymns, and prayers. A typical wedding can last up to an hour.

A religious ceremony will tend to be more expensive than a civil ceremony, and couples often invite a large group of friends and relatives. Additionally, the rigid structure is quickly becoming a thing of the past, and most modern couples don’t want to feel fettered by tradition, especially if they aren’t largely religious. Between all the requirements and the restriction of personalization and creativity, more couples are opting for courthouse weddings each year.

You can implement many traditional wedding elements and personal touches in a courthouse wedding, including groomsmen and bridesmaids, preparing personalized vows, and wearing a one-of-a-kind wedding dress. Ultimately, having a small ceremony does not prevent you from having a large reception, and you can still celebrate with a larger group of extended friends and family.

The size of the guest list and length of the ceremony make up some of the most significant differences between a courthouse wedding vs. traditional wedding. If you and your fiancé agree that a smaller, intimate setting suits you best, a simplified civil ceremony might be the choice for you.

Like a traditional marriage ceremony, your courthouse wedding must abide by your state’s legal requirements so your marriage is considered a valid union. Often, the state will require you to obtain a marriage license and have a witness to attend your ceremony. You can learn more about how to carry out a city hall wedding by visiting your state or city’s website or your county clerk’s office.

You’ll have to pay a flat marriage license fee in many states, and naturally, the price varies by state and county. Some other expenses you should consider include your county-appointed witness or government-approved officiant. To learn more about how much a courthouse wedding would cost you, visit your state’s website or call your county clerk’s office.

Compromising, Mixing in Traditional Elements, and Sizing Down

While some couples believe they cannot afford a traditional reception, they fail to consider how lovely a cheaper party can be. Opting for a summer backyard wedding and a rented wedding dress can create a special occasion at a fraction of the cost. If you don’t know someone with a large enough backyard, you can even rent space at a local park or green space.

Half of the battle amounts to determining what elements of a traditional wedding matter most to you, preserving those elements, and cutting costs in areas that matter less.

Even if your goal is to marry quickly, you are not limited to a courthouse. With some creativity and panache, you can craft a personalized wedding – even one with a more extensive guest list. Arranging a wedding doesn’t have to take long, although you may be limited in venue choice (and it may be harder for guests from out of town to make reservations and plans).

Making the Decision that Fits Your Needs

Ultimately, a civil wedding does not have to look radically different from a traditional wedding. Your wedding is what you make it, and you can turn a courthouse ceremony into just as big of an event as any church wedding.

The choice of courthouse wedding vs. traditional wedding comes down to what you and your spouse envision for yourselves.

There are plenty of lovely venues known for hosting beautiful weddings for those interested in a Los Angeles County courthouse wedding.

When you and your spouse are ready to make the first step, contact City Hall Wedding via our form on our website, and we’ll direct you on the best path toward making your special day one you will never forget.